(20th May 2019: I asked CEPUK to comment on their inconsistent position and they blocked me from Twitter. They also refused to comment on the wider range of approaches needed to remedy overmedication, or on my suspension initiated by an anonymous GMC psychiatrist. Recent Tweets suggest their primary concern is 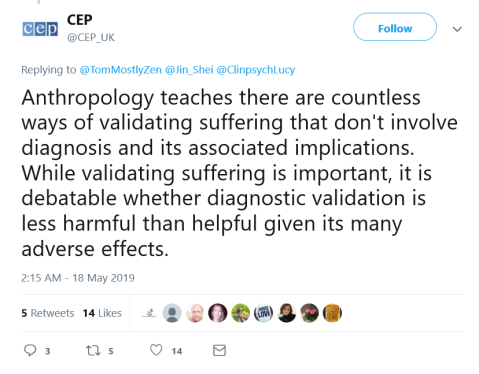 to promote anti-diagnosis purism. Or perhaps their careers: James Davies is an academic anthropologist at Roehampton University.)

(Well done CEPUK for publishing this comment, in contrast to the closely linked MITUK , who have Peter Kinderman as their lead professional).

James Davies writes ‘I would agree that what is being called ‘pill shaming’ is both wrong and indeed does happen.’

Does he agree that pillshaming is encouraged by his fellow CEPUK ‘members of council‘ Dr Joanna Moncrieff, who has stated ‘there’s no such thing as an antidepressant’ (https://drnmblog.wordpress.com/2018/04/18/pillshaming-is-real-heres-a-newish-way-to-reduce-it-and-to-reduce-antidepressant-use/), and Peter Goetszche, who has disparagingly called them ‘happy pills’ (https://www.madinamerica.com/2014/01/psychiatry-gone-astray/)?

(Added 16th February 2019: I met James Davies at the 2018 ‘Critical Psychiatry Network’ conference and we had a good conversation about his book Cracked.

He has not responded to my above question. I have reminded CEPUK of it several times on Twitter.)

Pillshaming is real: here’s a new(ish) way to reduce it, and to reduce antidepressant use

Some ‘Critical Psychatrists’ have gone too far in stating that ‘There’s no such thing as an ‘antidepressant’’.[1] Although the evidence shows that, even in moderate depression, nine out of ten people (maybe many more) will be getting largely a placebo effect, it is less clear whether the additional distress caused to antidepressant users by such talk is outweighed by the benefit to those who are warned off, and stay medication-free.

And anyway, UK antidepressant use has doubled in the decade since the publication of psychiatrist Dr Joanna Moncrieff’s Myth of the Chemical Cure (2008), and Harvard psychologist Irving Kirsch’s The Emperor’s New Drugs (2009). In that time, the patents on almost all UK antidepressants have expired: so while there are still profits in brands and generics, pharmaceutical marketing has reduced a lot.

It may be difficult to prove that this hectoringly negative approach has been counterproductive, and actually increased prescribing; but social science research published in 2015 shows that ‘pillshaming’ is real, and often more than a mild irritant. The University of Westminster’s Professor Damien Ridge has been studying this issue for a decade, and with his co-researchers he found that many users were ‘concerned about shameful antidepressant use and deviance’, some even struggling with the idea that they were ‘malingerers’.

It will be of concern, to people who have experienced pharmaceutical harm, that it does not feature more prominently. I myself wonder if Dr David Healy, who still maintains that antidepressants cause more harm than good, if not adequately monitored,[2] is not a little too focused these days on his expert witness work, rather than engaging with regulatory authorities and the wider public.

The first four words in the title of Professor Ridge’s 2015 paper, a quote from a person on antidepressants, is telling: ‘My dirty little habit’.[3] (academic paywall, but I will later do a longer Blog piece on Ridge’s work)

So, is there an alternative to ‘pillshaming’, that will still draw attention to the very limited direct pharmaceutical effect for at least nine people out of ten? Arguably, doctors should be telling patients about the latter anyway, and imminent new guidance from the GMC on ‘a doctor’s duty to disclose relevant information and risks’ may be an opportunity for ‘antidepressant’-skeptics like myself to foreground concerns again.[4]

I suggest that new patients (with non-severe depression) about to be offered antidepressants are offered a placebo as well. Note: ‘as well’ rather than ‘instead’, because for the patient not to be informed is unethical, and although there is some interesting research on people knowing they are taking ‘sugar pills’…well, let’s not go there.

I am talking about a parallel with randomised controlled trials, but as a routine structure of treatment, not as research. At its simplest, there would be a fifty-fifty chance of getting the placebo, and the treatment would be ‘unblinded’ after 8 weeks. A greater level of complexity would involve a longer period of, say, 12 or 16 weeks, with a crossover in the middle.

Who would provide these ‘blinded treatment trials’ first? Psychiatrists have more time for patients, but they tend to see either more complex cases or more severe depression. It might be best for those GPs, especially academics, who have a serious interest in mental health, to take this up. They would be well-placed to run pilot schemes identifying people presenting to GPs with more straightforward moderate depression.

Of course, many people would turn down the treatment trial, and opt for ‘unblinded’ antidepressants. But at least they would have been informed about placebo, and even potential harms, in a less shame-inducing way.

(Added 21st April: thanks to Dr Duncan Double MRCPsych for comments on a very early version of this piece)

(April 22nd: Paragraph 4, ‘it does not feature more prominently’ changed from ‘little awareness of it was reported’)

(Added September 19th: search my other Blog pieces for ‘Anti-Diagnosis’)

Nick Clegg has apologised for using the word “nutters” to describe the conservatives’ East European allies in the 22nd April leaders’ debate: ”I am acutely aware that the stigma of mental health causes great distress to many people and my use of language that could be considered derogatory was entirely unintentional.”

This seems a bit strange, because much of the language used in these events is pre-planned. Also, only four weeks before the debate, the mental health charity Rethink obtained an agreement from Mr Clegg, together with the other leaders, not to use “mental health slurs” during the election campaign (1).

Less than a year ago the former Labour minister, Denis MacShane, made exactly the same point about the Conservative allies, but using the more derogatory “loonies and wierdos”. This was in the House of Commons, where there appears to be a guideline against “insulting, coarse, or abusive language”, but perhaps significant is the qualification “particularly as applied to other Members [of Parliament]” (2).

Back in 2006 David Cameron talked about UKIP as being “fruitcakes, loonies and closet racists, mostly”. UKIP’s Nigel Farage demanded an apology over the racism allegation, but interestingly he said that “fruitcakes and loonies” was fine, because “we have a sense of humour”.

So Nick Clegg may have thought that his own language was an improvement on “loonies”.

(2) Some Traditions and Customs of the House: House of Commons Information Office. January 2009

Published at www.DrNM.org.uk on 30th April 2010; transferred to DrNMblog.wordpress.com on 9th October 2011