Sonia Macleod PhD has pro-industry, anti-patient views and should not be ‘the researcher’ for the IMMDS Review

Update 28th August: I have now discovered that Sonia Macleod was being paid by leading mesh maker Johnson & Johnson, valproate brands owner Sanofi, other pharmaceutical companies, and two tobacco companies, until late 2018. See bottom of this page for details.

(See my earlier pieces on the Review’s failure to ensure ordinary clinicians were/are informed about its work, and on the false and inadequate evidence given by the Royal College of Psychiatrists)

(The focus in this piece starts as being more relevant to mesh, and then shifts towards valproate and Primidos, but as a whole it is relevant to all three)

In the video evidence I have seen, Sonia Macleod (far right in this image) has been 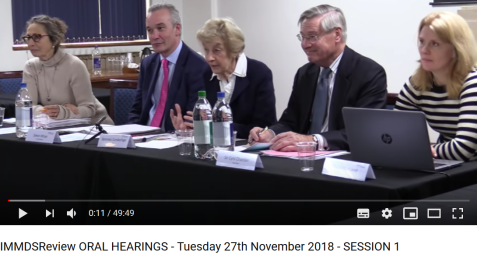 So why are there no biographical details of her on the Review website? Who is she?

Sonia Macleod is an academic lawyer, a qualified barrister, with a PhD in neuroscience. Her entry on the Oxford University Law Faculty website fails to state these last two facts, but a 2014 paper on device industry regulation, co-authored with her head of department Christopher Hodges, does:

Professor Hodges’ own university web page does note that he has worked for industry in the past (the trade bodies EUCOMED and ABHI), and the 2014 paper is markedly pro-industry in several respects. Firstly, the authors only consulted industry and regulators, not any patient groups:

Secondly, Hodges and Macleod clearly express the view that the largely industry-run regulatory system for devices is flawed only in appearance: ‘An outsider might wonder why one should have any trust in a regulatory system that involves public authorities that do not licence or inspect manufacturers, privatized ‘regulators’ in the form of notified bodies that can have variable standards and be purchased by the manufacturers that they contract with, manufacturers who hold considerable personal regulatory responsibility and who do not undertake clinical trials on every product…’. (my emphasis)

As insiders themselves, they see the problem as essentially one of public relations, to overcome ‘the key point’ which is ‘that the system is not readily grasped by a non-expert’:

‘A culture of pro-active communications should be developed in order to explain the regulatory system for medical devices, to the public, clinicians, patients, politicians, and other stakeholders, so as to clarify how and why it works and can be trusted, its benefits and achievements, and the nature of residual risk.’

‘Residual risk’? What does that mean? A ‘residue’ is something that is usually very small. The term has the ambiguity of PR (which now usually prefers to call itself ‘communications’), advertising, or perhaps a barrister’s advocacy for her client.

‘Patients’, ‘the media’ and ‘politicians’ are all enemies of this industry-regulatory-academic alliance. They can only disrupt its claimed (no actual evidence is cited) ‘benefits and achievements’, with their ‘calls by groups of affected patients, magnified by the media and subsequently taken up by politicians, to reform what they see as an inexplicably lax system.’

Macleod’s 2018 book, published after the IMMDS Review had started, also contains these views. I have read about half of it in electronic form, in the British Library. Parts of it can

be read and searched on Google Books.

Throughout the book Macleod promotes a false binary opposition between regulation (good) and litigation (bad), as means of avoiding drug and device harms. Towards the end she states: ‘The transactional costs of the US litigation system are sky high, in large part due to punitive damages awarded as a form of deterrence. If such measures do not make patients safer then a substantial part of their validity becomes questionable.’

The comparison between Europe and the US is often hinted at, but then avoided when it does not suit her argument. In the case history on thalidomide, she points out that strong US regulation led to hardly any cases of fetal injury, and in that on valproate she makes clear that the drug was again resisted by the FDA in the 1970s, only to be introduced after lobbying of politicians by the drug’s US pharmaceutical company.

The implication is that FDA regulation since the 1970s has been subject to political interference and lobbying, so why does Macleod not consider the possibility that that is the reason why patients are not safer in the US (which appears to have been her meaning), rather than the strong litigation culture? She makes no mention of the criticisms of the US system (which of course has a worldwide influence) as industry-dominated, made by the former editor of the New England Journal of Medicine Marcia Angell, and others.

Throughout, the book is negative to the idea that companies and medical professionals should be holdable to account in law by those harmed: ‘access to justice should not be conflated with access to litigation’ is typical. And Macleod often writes of regulation and litigation as though they are fixed natural phenomena, rather than administrative and legal constructs which can be changed at will by government executives and elected lawmakers: ‘…the evidential thresholds for these differ. Evidence of correlation may be sufficient for the former, but proof of causation is required for the latter.’

She suggests that regulatory approaches result in greater transparency, but the evidence is actually rather mixed. The companies responsible for thalidomide only funded trusts after considerable media pressure, and it appears that there are still historical details which are obscure. In his evidence to the IMMDS enquiry Professor John Abraham, another absentee from the 2018 book, stated that the disclosure processes of litigation had provided much material for his own research: I find it hard to believe that Macleod was unaware of his work up to then. Again, governments could legislate to prevent non-disclosure of clinically significant evidence of harms, in civil litigation which does not go to open trial.

If regulators are not always perfect, in Macleod’s version of history pharmaceutical and device companies are the good guys. I found no mention of the substantial criminal and civil fines imposed by the US Department of Justice in the last two decades. She praises the FDA’s loosening of regulation in the 1990s, without adding any caveat that drugs for disorders which substantially shorten life will tend to have many fewer complaining or litigating patients in the event of hyped efficacy claims or suppressed safety data: ‘…typical approval times for drugs for serious and life-threatening diseases such as cancer and AIDS were reduced to less than six months, and sometimes to as little as a few weeks. Rightly, the FDA’s drug review improvements were recognised in October 1997 by the John F Kennedy School of Government of Harvard University, with the Innovations in American Government Award.’

The ‘conclusion’ (provided here in full) to the chapter on valproate paints a rosy picture of the responsible pharmaceutical companies, and of neurologists who resent interference in their clinical freedom: ‘The same safety issue has essentially remained constant throughout, namely that the risks, especially of teratogenicity, are inherent in use of the product as a beneficial treatment for epilepsy. This is a risk-benefit issue, which should be considered by doctors when making prescribing decisions and should be made clear to patients so that they can make informed choices [note 108: H Angus-Leppan and RSN Liu, ‘Weighing the risks of valproate…’, 2018, 361, BMJ]. Throughout the lifespan of the product there has been ongoing updating of the recommendations for prescribers in an attempt to minimise associated risks. In some instances, it has been concluded that the regulatory response was slow to adapt to the increases in knowledge at the time.’

On valproate alone, the presence of someone as ‘researcher’ to the IMMDS Review who has published such a pro-industry (and pro-medical-establishment) opinion, actually while the Review is supposed to be ‘independently’ and open-mindedly gathering evidence, is a serious contradiction.

I have only read a selection of the chapters on individual drugs and devices, but was unable to find any significant weight given to the voices of harmed patients. A passage which selectively, and negatively, considers the behaviour of successful litigants is consistent with the anti-patient stance of the 2014 paper: ‘Some of the compensation [non-medical] personal injury claimants receive is used in ways that bear little relationship to the ‘purpose’ for which it was awarded under specific heads of damage…’.

Macleod is referring to pages 173-4 of a 1994 Law Commission report, ‘Personal Injury Compensation: How much is Enough?’ She claims ‘There is no head of damage for providing gifts or treats for family and friends, but this is a commonly occurring theme when claimants are asked how they had spent their damages.’ What the report actually stated, however, is rather different. The word ‘treat’ did not appear, ‘gifts for family and friends’ were reported by only 19-24% of claimants, and Macleod omits the fact that many claimants were in significant debt, quite possibly as a result of the personal injury itself. If ‘family and friends’ had supported the claimant through difficult times, emotionally and/or financially, it might well have been reasonable for them to have a small share of the award.

Arguably, whether Macleod is part of the panel or not may be less important than the filtering influence she has, on the evidence going to the four panellists who the patient groups have been provided some information about. It might have been appropriate for her to provide evidence as a witness, alongside industry and establishment medical organisations.

(In a future Blog piece I will touch on Macleod’s failure to bring her legal qualification and experience to bear on the questioning of the GMC by the panel).

Update 28th August: eight days after the above piece, a ‘register of interests‘ appeared on the IMMDS Review website. It stated the funder of Macleod’s 2018 book was the ‘European Justice Forum‘, which appears to be an anti-group-litigation lobby group

dominated by pharmaceutical and device manufacturers including Johnson & Johnson (makers of mesh) and Sonofi (valproate). This clearly shows undisclosed industry influence at the heart of the Review. Remarkably, the group also includes two tobacco companies, which raises an additional question for Professor Chantler, as he studied the behaviour of the tobacco industry in his review of plain cigarette packaging. 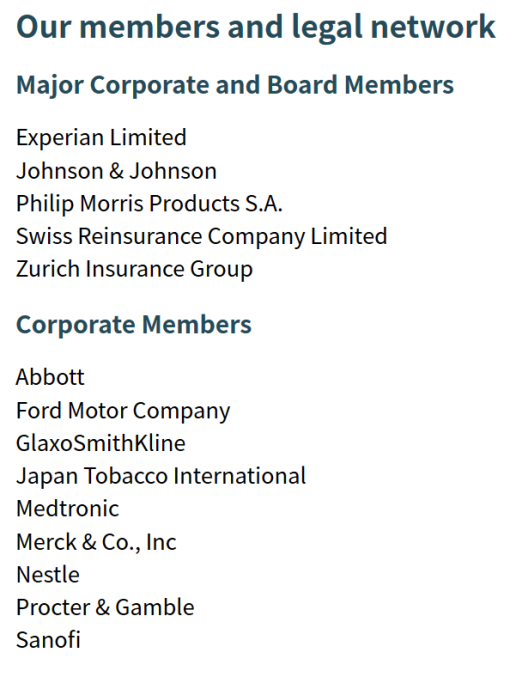 Next blog piece: questions put to the IMMDS Review Team, four days before they provided the ‘register of interests’.